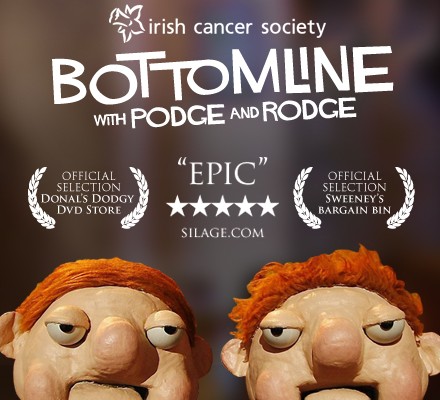 Podge and Rodge, beloved, foul mouthed, feck merchants from Ballydung are very much an Irish institute. The darker reflection of Zig and Zag, the popular alien duo of kids and breakfast tv entertainment fame. Their presence on Irish tv has been ubiquitous for nearly 15 years. So how in the world did they agree to let us give one of them cancer?

All in the name of a good cause!

Bowel cancer is not exactly a humorous topic but what is even less amusing is the culture of silence and embarrassment which prevents people from discussing potential bowel related problems with family and friends, never mind their doctor.

Our goal, to try to break down these taboos with humour. We started the campaign with a teaser trailer which I discussed here and in the last two weeks released the three scenes our little movie. And the response? ………… overwhelmingly positive.

So here you have it, three instructional videos on the symptoms, treatments and results of bowel cancer. You can watch all three below.

Really proud of the fact that the combined views for all the videos in the series, including the teaser or over 125,000 and rising. I’m particularly proud though, of contributing a new word to the english language in these videos. That word being, “The Cowels”

Enjoy and I hope none of you ever get jam on yer eclairs!

This is the original teaser for the campaign which I discussed here.